Buy, sell, trade... or just give away the DAMN thing!

With all the fun I'm having out playing in the woods, my daughter came to me a month or so ago and said she'd really like to learn how to ride. Now, she's about to be 14 and can ride the hell out of a horse - cantering and jumping, etc - but she's never been on anything motorized. I was so happy that she wasn't asking me for a horse that this little thing followed me home yesterday:

It's 2009 Yamah TT-R110, automatic clutch 4-speed, electric start, and it's been passed around more times than Paris Hilton at a Hollywood party. But, it's really clean, everything works on it and I got it for cheapy-cheap. I'm thinking she can drop this thing everyday for the next year and I can get my money back out of it when she out grows it.

Some craigslist back story...I looked around for a few weeks and found one of these bikes in PA about 100 miles away - a "2017, excellent condition, everything works on it and really clean, hardly ridden." I was a bit suspicious when I got them down over the phone to within $100 of the 2009 bike above. I load my daughter in the pickup and we ride two hours one way to see this bike. The first thing I noticed was that it was a lot dirtier than the CL ad showed. Went to start it - nope, "oh, he electric start hasn't worked in a while but it's easy to kick it off." Uh huh. I reach down to look at the chain and it's got about 4 - 5 inches of play in it and a heavy coat of rust and it kinks. It's been warmed up before I got there so I pulled the dip stick and the oil was black and there was a burned smell. I ask the parents where were their motorcycles and they replied "oh we don't ride. This is just for the kids." So I ask who maintains the bikes? I get a black stare back and the 10 year old hooligan standing there says "These bikes are so great we've never had to do anything to it." - meaning change the oil in the 2+ years they've been riding the snot out of it, any chain maintenance - all confirmed by them as "not needed." My daughter is standing there and I tell them they completely misrepresented the bike and now I've wasted 4 hours of my day for this POS. I looked at my daughter, who had the expression like Santa had left her a lump of coal, and said "We're passing on this one and we'll talk about it on the way home but you'll thank me later." The kind sellers offered another $100 off on the bike and told them "if you'd lie about the condition of the bike knowing I'd find out after a 2 hour trip, WTF makes you think I'd do any business with you? I'll haul it to the dump for you if you pay me $100 because that's the only way I'm leaving here with this bike." We jumped in the truck and drove the 2 hours back home where I got the opportunity to teach some Dad life lessons with her. If anything, that was the silver lining and worth the experience to see what it's like to walk away from something you really want but isn't right.

The bike in the photo above was next on my list - another 1 hour away from home and I learned to do more questioning with this guy. He maintains a lot of his own equipment; the kid turns off the gas every time he parks it; and the dad doesn't let him ride it unless it's clean and maintained. OK, we'll see. Turns out the bike was better than they said and I asked the kid, "Did your dad tell you that you have to sell this one first before you get the 125?" "I had to sell this one first" he said nervously. So I winked at his dad asked him for another couple hundred dollars off on it. He looked at me like I'd just knocked his ice cream cone to the ground. He asked his dad what should he do? His dad just shrugged his shoulders. So I jumped in and said "Just kidding. It's priced right."

Is there a way to complain about a seller on CL?
The two most important days in your life are the day you were born and the day you find out why. - Mark Twain
Top

Im glad you were able to find something decent for your girl. I hope she learns to ride it and have fun.

Sorry to hear about your bad luck w/ a crap bike. At least you were smart enough to walk away. Im sure that was extra hard with your daughter along for the ride.
Suzuki DR650
Beta Xtrainer
Sherco 290 trials
Top

Too good to be true?

I'm tempted to snag it but I may become single if I bring another home. Hmmm

Maybe he left out a 1 at the beginning of the price.
Top 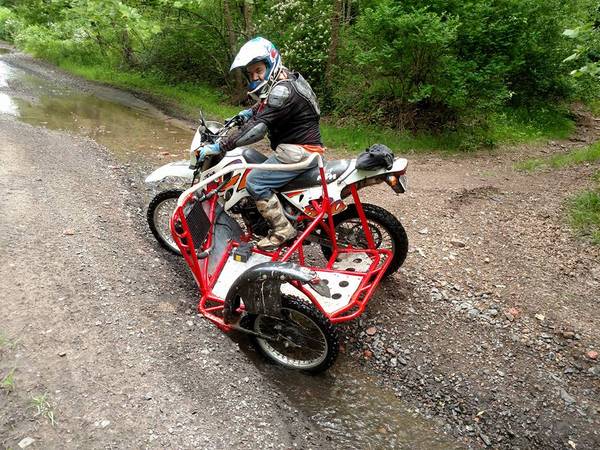 He used to have a CR500/Wasp framed MX hack that was dualsported (somehow). Was a hoot to drive or passenger. But starting the DAMNthing became the Achilles Heel of the experience.
Suzuki DR650
Beta Xtrainer
Sherco 290 trials
Top

Must ignore, must ignore...
Top

Hey, could I possibly borrow a coupla bucks from somebody?

Users browsing this forum: No registered users and 5 guests